Should Dutch Shepherd eyes be examined?

Should Dutch Shepherd eyes be examined?

The European College of Veterinary Ophthalmologists ECVO (www.ecvo.org) recommends yearly ophthalmic examinations, starting before first breeding for a breeding animal, and three examinations in a lifetime for a non-breeding animal. Eye examinations of Dutch Shepherds anywhere in the world are nowhere near those recommendations, but should they be?

Here we are looking at a little graph (positioned a little lower on this page!) that sums up all the eye examined long- and shorthaired Dutch Shepherds in Finland. On average 16% of all test results were “not free”. This means approximately one in every six dogs comes back with a problem. There are several arguments that one could bring up to say this does not justify regular testing, but hear me out:

Not in my variety …

Since this statistic includes both long- and shorthairs, you might be tempted to think it must be the “other variety” with problems here. Actually, the numbers are very even: 19% of longhairs and 13% of shorthairs came back not free, while longhairs had a few dozen more results. It must be said that some of the findings have only occurred, or occur far more commonly in one variety. But obviously, there are longhairs with shorthair blood and shorthairs with longhair blood in here, and these varieties share more and more genetics with each year.

ECVO forms only list illnesses that have been classified as hereditary eye diseases by professionals far more knowledgeable than you and me. But generally speaking, how do you know if something is hereditary and not just a coincidence? Anything that occurs more commonly in a bloodline, or in a breed than in other bloodlines or breeds has a hereditary basis in one way or another. A trait or an illness can be hereditary even if we do not have a genetic test for it, or even know the exact mode of inheritance. This is also the case with most eye diseases.

Right, some of the diseases found in the breed really are not problematic at all. For example, distichiasis is common in longhairs, but in most cases just means there are a few extra lashes growing in unwanted places. However, a variety of cataracts and keratitis/plasmoma form a large chunk, around 1/3 of all diagnoses (given that some dogs with cataracts were examined more than once). Both illnesses can be life altering if serious, requiring surgery or medication, and can even blind the dog.

ECVO can also give us more information on how seriously each illness should be taken in breeding. They give each separate eye disease a classification as follows:

Distichiasis is classified as a category 1 illness, but chronic superficial keratitis and hereditary cataracts are classified as category 2, meaning individuals with these illnesses should not be used for breeding.

Of the other illnesses found in Dutch Shepherds, atresia of lacrimal punctum and corneal dystrophy are category 1, coloboma is category 2, and lens luxation is category 3. Insignificant cataracts are not visible without a microscope, and are considered exceptions (no classification given).

16% is not enough to warrant screening …

Currently we routine screen for several, less common health problems in the breed (please note that the numbers here are based on quick stat checks only meant to give you a general idea of how common these problems are):

The benefit of eye examinations is that it is possible to find a range of diseases with the same, relatively inexpensive procedure.

Well, not in my line at least …

It can not be seen here, but all bloodlines have left sick dogs. Every dog with distichiasis, cataracts or keratitis is one or two steps away from a “big name” or a popular pedigree, both in longhairs and shorthairs. These three mentioned illnesses are currently the most common eye-related problems found in the breed. Please note that most eye diseases, especially in their mild forms are not necessarily obvious to a dog owner’s eye, and an official diagnosis requires a visit to an eye specialist. Without actually examining your dogs you will not know, and can not claim your dogs are free of inherited eye diseases. 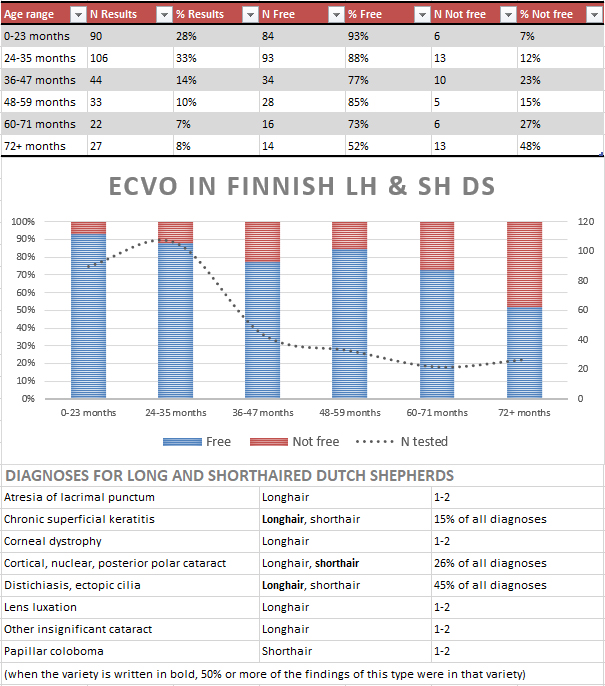 Next, let us consider how the needs of the breed meet current examination practices.

At what age are most dogs examined?
More than 60% of all dogs were examined when they were under 3 years old, and 75% were under 4 years old. The mean age of all eye examined dogs is 37 months – 3 years.
But when are most illnesses found?
The mean age of all new disease diagnoses is currently 52 months – the average dog is over 4 years old when their hereditary eye disease is found.

The mean age of finding the most common eye diseases in Dutch Shepherds are 3 years for distichiasis, 5 years for cataracts, and 6,5 years for keratitis/plasmoma. This means that the most serious eye diseases we currently have in the breed will usually not be revealed in that checkup done on a 1-2 year old dog. Actually, there is currently only a 1/10 probability of finding anything when you test your dog before they turn three. Yet this is the most common age dogs are tested, if they are tested at all.

As a breeder who already has over 20 eye examinations done on her puppies (only two Finnish breeders – both who have produced double the number of litters than I have – are somewhat ahead in testing numbers. I can never thank the active owners of my dogs enough for being able to type that brag!), I have seen my share of “not free” diagnoses. Some of them harmless, some of them not. This is probably why I feel so passionate about this: eye testing was something I decided on when I started breeding, but the findings have made me realize there is still much to be discovered with Dutch Shepherds and their eyes.

I want to challenge everyone to take their 4+ year old dog to an official eye examination, symptoms or not. Currently the eye status of the breed is skewed towards examinations made on many young dogs, and we really need more information on older individuals to know what we are fighting here. Based on current data dogs that are tested after they turn 6 only have about a 50% chance of being healthy, and it would be wonderful to get more information to prove that this is not actually the case.

Thank you for your time!